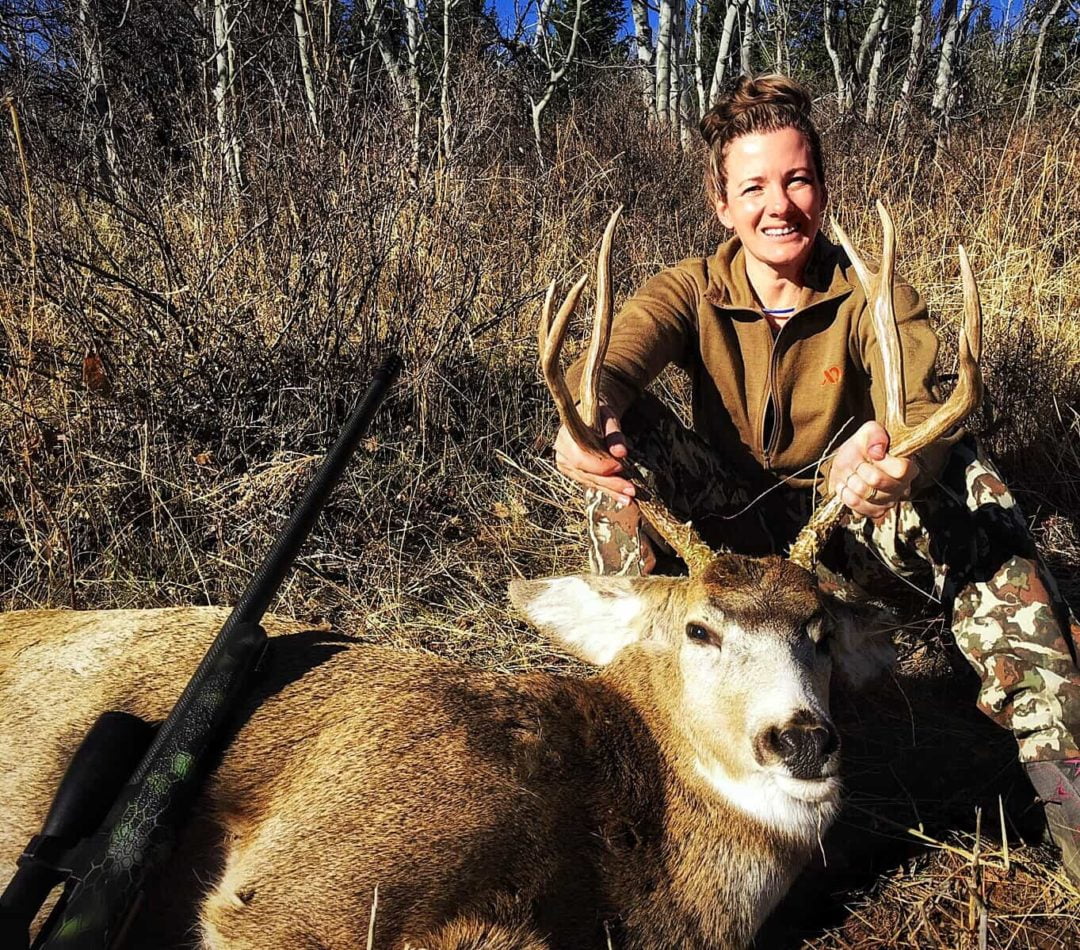 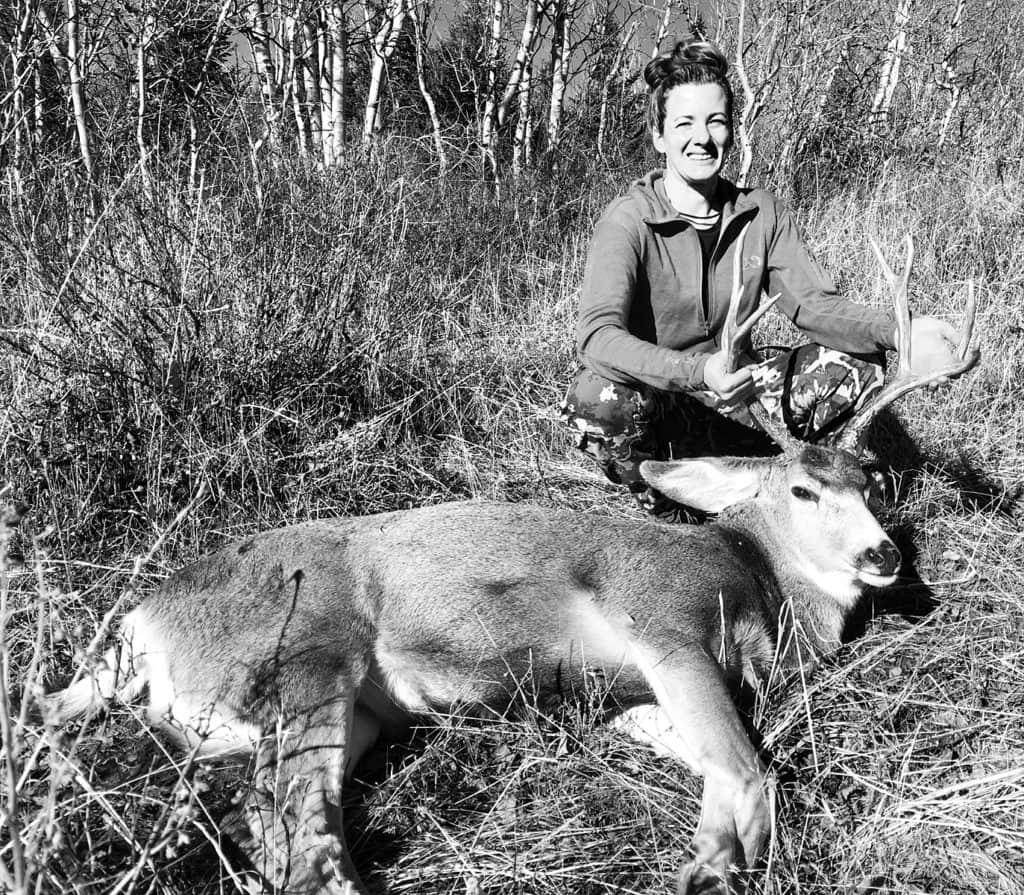 Here he is, the buck that wanted so badly to come home with us, that finally got his wish;)

Check out this mule deer.  Isn’t he handsome?  This was almost the hunt that didn’t happen.  I drew this mule deer tag several months before I knew I would have to have surgery on my hip, so after finding out the hunt would be taking place after the surgery, I was concerned about my level of mobility and debated very seriously about not going.  After many discussions between ‘Team R & R’,  they formulated a plan for me and my limited mobility.  If you don’t know Ryan and Robby, you may not know when it comes to hunting, these two are very determined individuals.  They take it to a new level, for not only themselves but for EVERYONE.  I’m saying this because most people aren’t like that.  You hear the terms ‘mentally tough’ and ‘SITFU‘ (my personal favorite) get thrown around a lot and it seems most hunters feel they are determined and tough and will do whatever it takes to get the job done…for themselves maybe, but not always if they are helping on someone else’s hunt.  Very few people are willing to put in that kind of work for others.  It would have been very easy for both of them to say that this hunt would be too much, too soon, for me,  but I don’t even think that thought ever occurred to them.  I never felt like I was a burden, or Robby was less dedicated to my hunt than Ryan, or myself.  Robby and Ryan spend HOURS coming up with my hunting plan, and Robby scouted like crazy to find the perfect spot for me with my level of mobility.  How can you even begin to show your appreciation for that?  Ok, now that you know what badasses’ Team R & R are, I will get on with my story:)

Day 1: was kind of a shit show as I had to take several planes to get to Southern Idaho. Ryan was already down there on another hunt and would be meeting me at Robby’s.  Because I hate to fly and figured I would need to be somewhat coherent for my 2 layovers I decided to skip the Xanax, but I was going to definitely upgrade my airline ticket to receive a free drink, thank you very much!  As a side note, Have I ever mentioned how amazing Bose noise-canceling earphones are for flying?  What crying child?  I can’t hear them…Best purchase under $250 EVER.  My flights ended up being pretty tolerable, and I was excited to get to Southern Idaho because I would also get to see my BFF, Jodi Denning too! So after arriving and getting picked up by Jodi and catching up, we went back to her house.  When we arrived, Ryan and Robby had decided to not waste the day and we headed up to a spot we would be hunting the next couple of days.

We had been glassing for less than an hour and I see this buck to my left, about 200 yards away.  He was just standing there, looking at us.  He didn’t even seem the slightest bit bothered by us and made no effort to run away.  I couldn’t believe it.  This crazy buck is just standing there!  Now, I don’t know why I  have this mentality, but I always keep talking myself out of shooting on the first day.  That’s not only stupid, but it will HAUNT YOU.  Seriously.  I know this probably sounds silly, but on both hunts Ryan researched and scouted these units for me with of the help from friends and I felt it would kind of a slap in the face to them for me to shoot the first animal I saw, so I ate tag soup on my elk tag the year before despite having an amazing shot at a really nice 6-pt. (in my defense all I had heard about for months before my hunt were these ginormous elk they had seen)  I think I still kind of feel that way, but am trying to get over that silliness.  Shoot.  I got off topic again.

Back to the stupid/brave buck.  After a while, he wandered off, and it was time to go back to the house.  We were going to stay the night at Jodi and Robby’s, then head out to the unit the next morning and stay there the remainder of the hunt.  It was great catching up with them and the kids that night but not so awesome when their poodle from hell, Trudie, kept trying to molest my leg.  Not cool Trudie.  You are a LADY!

Day 2: The next morning I knew it was going to be a good hunt when Robby had a cup of coffee waiting for me when I got up.  Hell Yeah. That’s what I’m talking about!  I now have a new set of expectations for my hunting partners LOL. When we got to the unit we split up because Robby also had a tag for that unit and there was a buck he had his eye on.  So Ryan and I set off in a different direction.  I quickly realized my limited mobility may not be our biggest problem.  Ryan was super sick and was hacking up a storm.  In addition to that, his eyes were almost swelled shut from what we suspected at the time to be an allergy to Sagebrush.  Shit, right?  he is the spotter!  We didn’t have any luck on day 2, except for Robby finding a pair of really awesome Moose sheds. So it wasn’t a complete loss.

Day 3: Ryan spotted a really nice buck and I try and get on him but end up making a bad shot off a rock.  We call Robby and he helps us search for HOURS for this buck to no avail.  I was so pissed off, disappointed and seriously freaking embarrassed.  I know Ryan was super irritated too, but Robby took it all in stride.  He could have been a huge A-Hole about stopping his hunt to help us look for this deer, but no,  Not only was he super positive we would find the buck, when we didn’t, he reassured me this happens to every hunter and we did everything we could and to not be too hard on myself.  #SITFU, right? So Robby goes back to his hunt and Ryan and I spent the next hour or two glassing.  Soon, Robby calls us to tell us he shot the buck he had been watching and we go up to help him.  This buck has a seriously cool rack and this pic does not do it justice.

The next morning I was really anxious.  This was our last day there, and I was so worried I was going to be eating tag soup AGAIN!  We all of us glassed for hours with no luck, After a while, Robby decided to go get the truck and pull it closer for me.  Ryan and I were still glassing while we waited, then I spotted a really nice buck a couple hundred feet away.  I throw my pack up on a rock to use as a rest and Ryan does everything in his power not to go into full freak-out mode.  I take aim and shoot and he says, ‘OH, MY GOD, YOU SMOKED HIM, BABE!’  and all I could say is, ‘are you sure, are you sure???’ He was down, but it just didn’t sink in.  I felt like I was in a dream.  Within seconds Robby is calling us on the phone.  I can’t remember exactly what he said, but I think it was something like ‘HELL YEAH!  I heard the shot.’  He got to us about 5 min. after we got to the buck and he actually may have been more excited than I was!  Do you want to know the craziest thing though?  This was THE SAME BUCK that was hanging out with us the first night of our hunt! Remember?  The brave/crazy one?  Lol, I guess he really did want to come home with us. Soon I will be hunting this unit again with Robby and Ryan and I am SO EXCITED!!!  Stay tuned, I hope Robby and I are as lucky as we were last year!

More pics from this epic hunt: 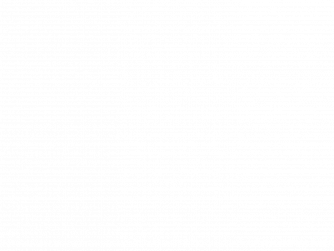 We are super excited about this build.  We reviewed a 6.5 PRC built by Precise Rifle Solutions last year and it went 5 for 5.  It... 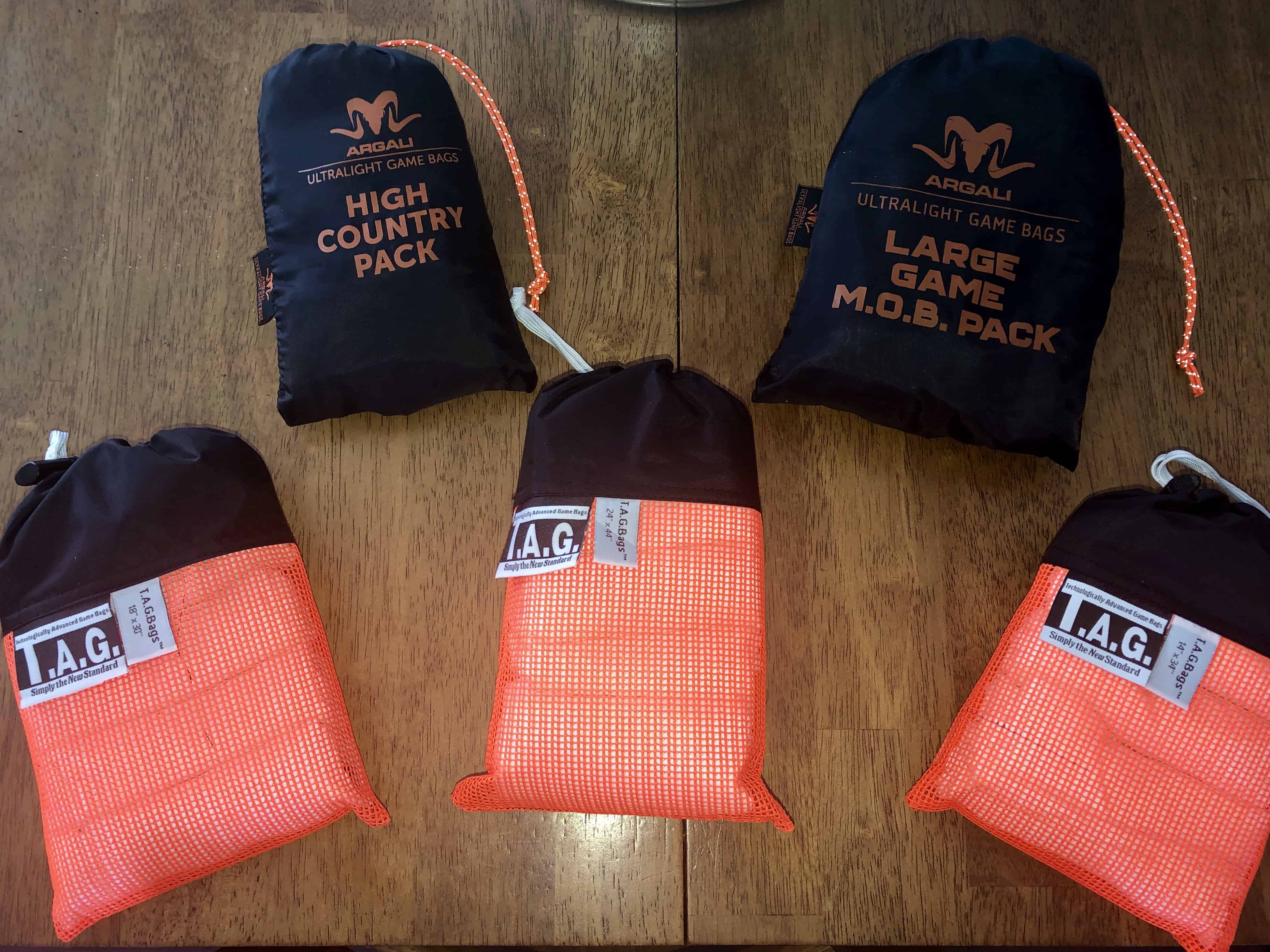 Ryan talks about the differences and similarities in the T.A.G. and Argali Bags. All bags are available on the Rokstore. 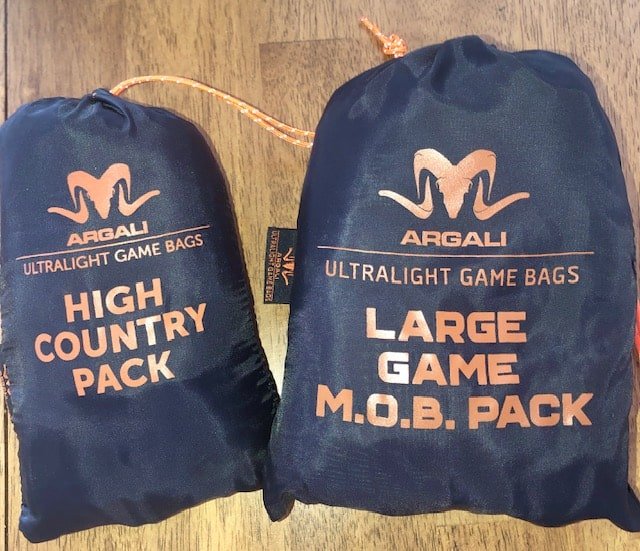 Ryan compares the ARGALI HIGH COUNTRY PACKS and LARGE GAME M.O.B. PACKS and the suggested uses for each size kit. Check them out on... 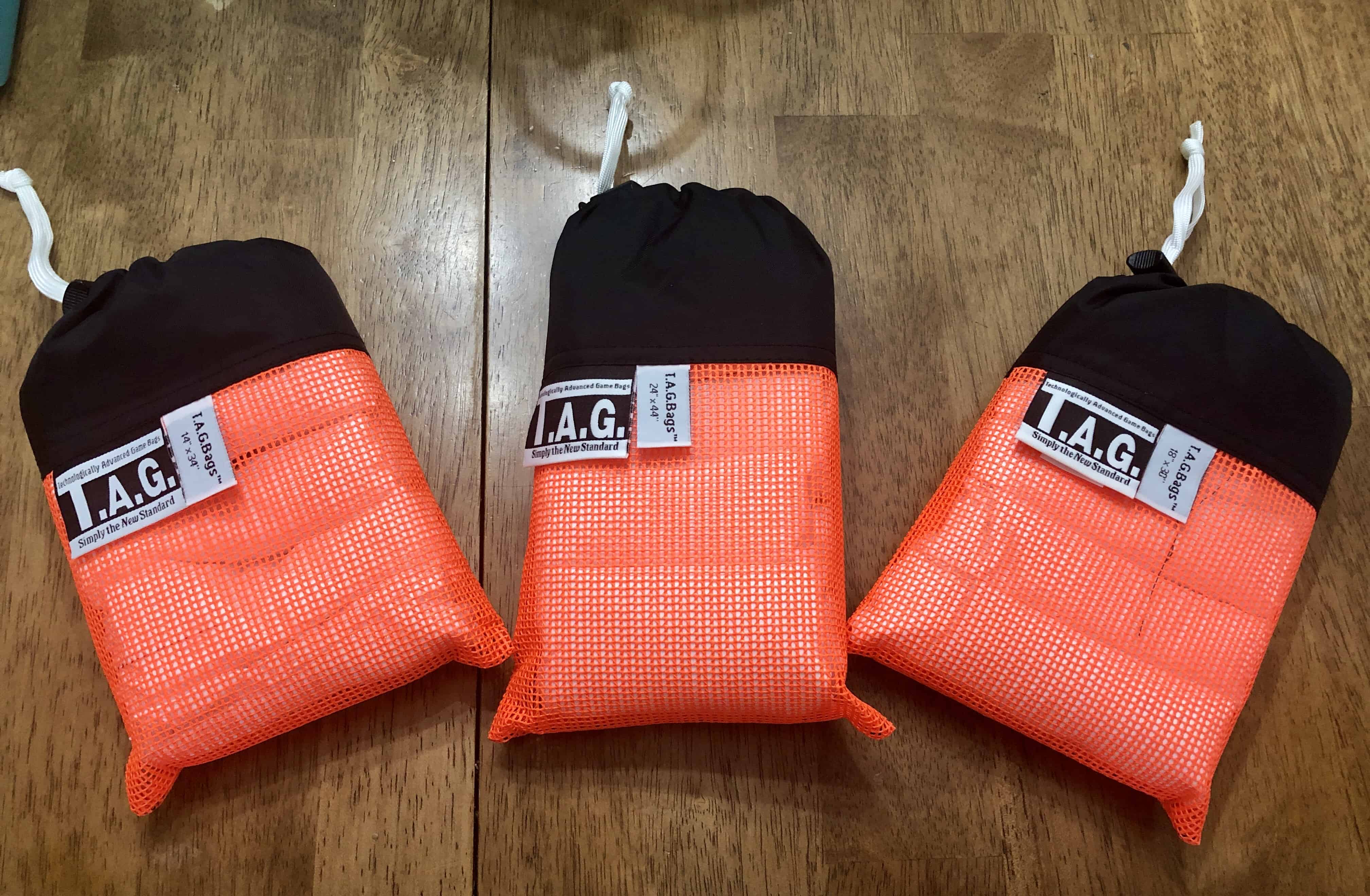 Here is a quick comparison of the 3 sizes of Tag Bags sold on Rokslide.com 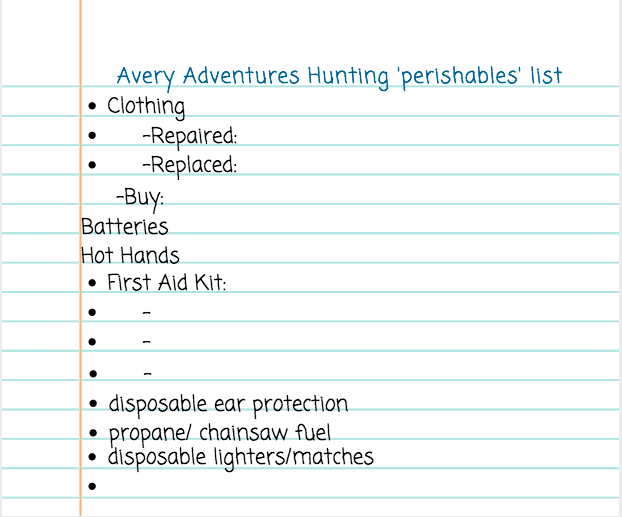 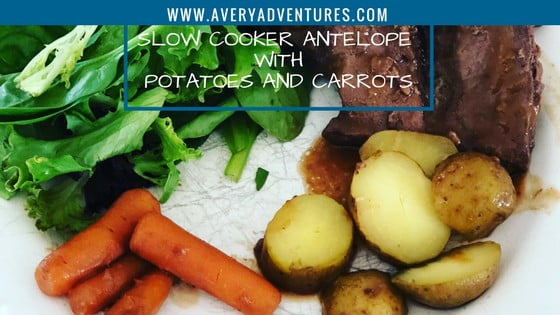 Slow-cooker Antelope with Carrots and Potatoes

This is a really simple recipe.  I am not Martha Stewart (but wish I was!).  If I can figure out how to cook something in a Slow-Cooker...